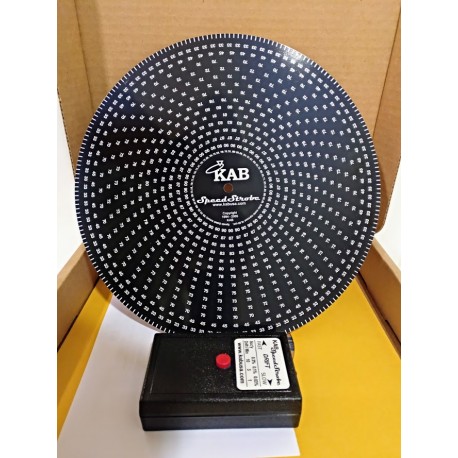 Kab SpeedStrobe is the simplest, fastest and most effective tool to precisely adjust the speed of our plate. 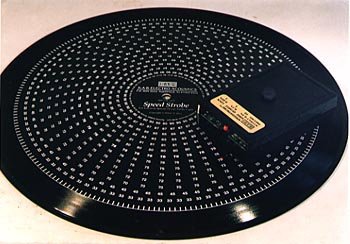 The KAB SpeedStrobe was designed to replace and improve upon older strobe designs that relied on power line frequency. We also wanted something that was easier to use and included the ability to actually measure small amounts of error. Not just a go - no - go - test.

The KAB SpeedStrobe features a quartz locked illuminator with 99.99% accuracy. And since it is battery operated, it works everywhere. No need for 50 or 60 Hz versions. The Disc is silk screen printed on durable 20 mil PVC.

Instead of hypnotic bars, the KAB SpeedStrobe features the actual speed numbers. In use, the desired speed is read directly from the disc. no searching for the right band. Covers 16.66, 33.33, 45, 70.59 - 90 RPM. By timing the drift of the display over one minute, accuracy can be measured to 0.03%

Strobes work on the principal of "freeze motion" illusion by using a precise flashing light. A disc with incremental markings, evenly spaced around a circle is illuminated while it is revolving. When the rate of the flashing light matches the passing of the markings beneath it, the motion of the disc will appear stationary. The mathematic formula that describes this condition is:
The Ratio of F ÷ RPM = N × (1 ÷ 60)
With Strobe Frequency and Platter RPM known, solving for N:
N = F ÷ RPM × 60
Where F = Strobe Light Repetition Rate or Frequency
RPM = RPM of Turntable
N = Number of incremental dots, lines or other icons, evenly spaced around the disc.

The two above examples apply to strict 60Hz or 50Hz illumination as with the KAB Speedstrobe illuminator.
Note that older strobe discs that used neon or overhead fluorescent light will have double those markings because gas lamps flash on every half cycle and thus produce flashes at twice the line frequency.