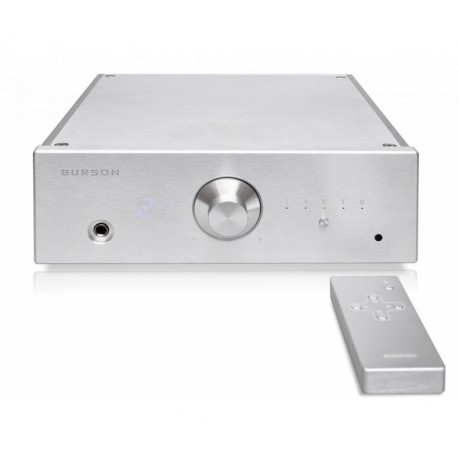 Burson Audio Conductor V2 has been just lanched as the new flagship of Burson for those with no need of DAC, the new Virtuoso surplus his eldfer brother in every field you try, more clean, more power, more adictive.

Burson Audio is proud to announce the new Conductor V2 with superior sound and more power, setting a new benchmark in the reference class category. This is a major update from the Conductor Virtuoso (V1).

Thanks to a new high density winding technique, the new power transformers that support the headphone amp and preamp section are able to output twice as much power as the Conductor V1.

The entire circuitry has been redesigned based on our new V5 SS opamp which is the best sounding audio opamp in the world. While still a pure Class ­A designed with Field Effect Transistors, Conductor V2 fully utilize the two 70W transformers to output over 8200 mW per channel into 16ohm. It will comfortably drive the toughest headphone in the world while delicately handling the most sensitive.

The PGA2310 is the flagship volume control chip offered by Texas Instruments. With an impressive dynamic range of 120dB and 0.0004 THD measurement, it is the go to solution for pro audio applications and broadcast studios, allowing for a 0.5dB per step of fine control to Conductor V2.

With the PGA2310 the Conductor V2 operate smoothly and silently with no mechanical moving parts. It will serve you seamlessly for years to come! Learn More [+]

Upgrade in a Snap

If you want more from the Conductor V2, upgrading is a snap! With our modularized design, a reference class DAC PCB can be added which allows for TOS link, Coaxial Input that supports up to 24bit 192K of input. Furthermore, you could add the latest XMOS USB module that supports most IOS & Android devices, up to 32bit/364K sampling, 256DSD and DXD. Once all digital options are included, the reference class V2 becomes a V2+. Learn More [+]