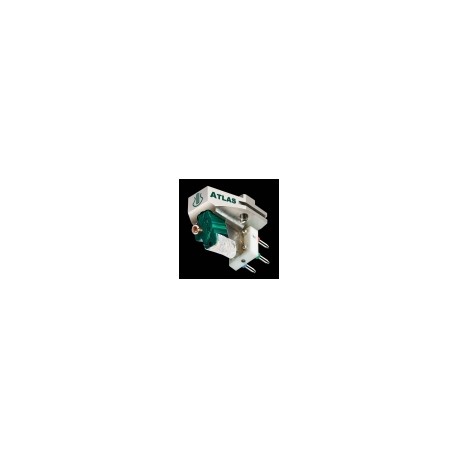 STATE OF THE ART MOVING COIL CARTRIDGE
Introducing the ATLAS, the world's first asymmetric MC phono cartridge.
The Atlas is Lyra's new flagship. It is also the first time that anyone has made an asymmetrically structured phono cartridge. Why asymmetric? Because, by literally misplacing the barriers to great sound that are present in every other cartridge today, it confers a number of important performance benefits.
First, having differently-shaped structures on the left and right sides suppresses the formation of standing waves inside the cartridge body, thereby creating a less resonant, more neutral cartridge body. Second, the asymmetric construction offsets the front magnet carrier and its associated mounting system so that it is no longer in line with the cantilever assembly. Doing so opens up a direct, solid path between the cantilever assembly and tonearm headshell so that vibrations from the cantilever can be quickly drained away once they have been converted into electrical signals, again suppressing resonances.
Lyra remains the only cartridge manufacturer to mount the cantilever assembly directly into the cartridge body and thereby achieve a seamless, totally rigid connection between cantilever assembly and headshell. The effectiveness of this system has been increased with the asymmetrical structure of the Atlas. Control over spurious resonances is further assisted by the use of a narrowed mounting area, which couples the Atlas more tightly to the headshell and facilitates the transfer of vibrational energy into the tonearm.
While the Atlas retains the yokeless dual magnet system, diamond-coated boron rod cantilever and variable-radius line-contact stylus of the Titan, the double knife-edge cantilever assembly mounting structure has been revised for greater rigidity, and the signal coil system is completely new. Rather than a square, the coil former is in the shape of an X, which allows each channel to operate with greater independence from the other. This gives better tracking, tighter channel matching, improved separation, and lower distortion due to crosstalk.
At the same time we were able to increase both the performance and efficiency of the generator coils. The Atlas has 12% higher output voltage than the Titan, but accomplishes this while reducing the amount of wire in the coils by 22%. The mass reduction further improves tracking performance, while the enhanced output and electrical characteristics allow phono stages to perform better.
The Atlas uses Lyra's "New Angle" technology, which mechanically pre-biases the signal coils so that they are perfectly aligned to the front and rear magnets when LP playback takes place. This equalizes out discrepancies in vertical and horizontal compliances, and enables the Atlas' coils to move with equal ease in all directions for optimal performance.
As with the Titan and Olympos, the Atlas uses a body that is meticulously carved from a solid billet of titanium, through a process that involves both contact (for the exterior) and non-contact machining (for the interior body structures). But by making most of the Atlas' body surfaces non-parallel, avoiding dimensions that are multiples of other dimensions, and adding a pre-stressed phase-interference resonance-controlling system, resonances have been inhibited further.
We firmly believe that the Atlas represents an important step forward in LP playback.